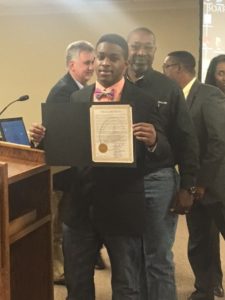 We’re so honored and proud that Coweta County has declared December 8, 2016 “Sergio Wallace Day” to recognize our 2016-2017 Youth of the Year for demonstrating outstanding leadership in his school, Club, and community!

WHEREAS, a normal childhood came to an abrupt halt when, at age four, Sergio was admitted to Grady hospital, victim of abuse by his parents; and

WHEREAS, once released from the hospital, Sergio was placed into foster care where he remained until adopted by Lodge and Lillian Wallace of Newnan where he was nurtured and given the challenge to give 100%; and

WHEREAS, despite the nurturing nature of his new family, Sergio became surrounded by an anti-social shell created by insecurity and low self-esteem stemming from his life’s journey; and

WHEREAS, Sergio decided to surrounded himself with people who would complement him and teach him better morals of life, including the Newnan/Coweta Boys and Girls Club that provided Sergio the extra support system needed to break out of that shells; and

WHEREAS, Sergio has attended the boys and girls club since first grade, providing great mentors and opportunities to push his limits and

WHEREAS, Sergio now plans to attend Kennesaw State or Georgia Tech to pursue a degree in Robotic Engineering; and

WHEREAS, Sergio competed against 20 teens from Boys & Girls Clubs across Metro Atlanta to win the title of Youth of the Year, the club’s most prestigious award, recognizing teens who are volunteering in the community, committed to academic success, and are local leaders.

NOW, THEREFORE, the Coweta County Board of Commissioners does hereby proclaim Tuesday, December 8, 2016 as Sergio Wallace Day, in recognition of his achievements in life and his being named the Boys and Girls Clubs of Metro Atlanta’s Youth of the Year.

The Board also wishes to bestow best wishes as he continues to make a difference in the lives of others while fulfilling his dreams and asks everyone to remember his message that you must “determine who you are, accept where you have been and although it may have been dark, forgive and move on to be the person that you know you can be.”

By Terry Mitchell in Jesse Draper

By Ruth Holder in Carroll County